Dark Sky Reserve Status for Snowdonia - The sky at night

Some of you may remember the late, great Patrick Moore, the eccentric astronomer who, through hosting BBC TV’s long-running The Sky at Night, first popularised stargazing.

If he were alive today, he would – forgive the pun – be over the moon about our fascination with all things heavenly in those infinite galaxies of stars, space and black holes. He’d no doubt also be making a bee-line for the Snowdonia National Park, which in 2015 was declared the world’s 10th International Dark Sky Reserve.

So what is a Dark Sky Reserve? It’s a prestigious award given by the International Dark Sky Association to places with outstanding night air quality and where real efforts are being made to minimise light pollution.

Mind you, we had something of a head start here in Snowdonia Mountains and Coast. Naturally speaking, we’re amongst the darkest places in southern Britain. Covering a land mass of over 800 thinly populated square miles, we’re a dark haven for stargazing, especially in our rugged, mountainous interior.

Look at it this way: Snowdonia is in the dark, but we’re shining a light on the heavens.

Wales as a whole is ahead of the curve. There are also designated Dark Sky areas in the Brecon Beacons, Pembrokeshire Coast and Elan Valley. As the Dark Sky Association, based in Tuscon, Arizona, said: ‘Wales now leads the world in the percentage of its territory enjoying protected status for its night skies… Nowhere else has achieved comparable success in recognising the value of night time darkness and taking concrete steps to safeguard it for future generations.’

So, where to look? Well, anywhere really in this part of Wales. And there’s no need to invest in expensive equipment. Very often, the naked eye or binoculars will suffice.

In general terms, looking south depending on the seasons you can see Orion the Hunter, Gemini, Sirius, the Pleiades or Seven Sisters, the Summer Triangle, Cygnus, the square of Pegasus and the Milky Way (our own galaxy).

Looking north, the stars here are the same all year round, so can easily be found on a clear night. The group of stars known as the Plough are especially easy to recognise. The others are Cassiopeia and, of course, the North Star (or Polaris).

Here are just a few of the locations where you’ll get a great view of the night sky.

Llyn y Dywarchen
A popular fishing lake located alongside the B4418 above the village of Drws y Coed in Dyffryn Nantlle. It’s just off the A4085 Beddgelert to Caernarfon road at Rhyd Ddu.

Llyn Geirionydd
This forest-ringed lake, in the hills west of Trefriw in the Conwy Valley and accessible via a narrow minor road, has a real sense of solitude, especially at night

Llynnau Cregennen
A pair of lakes on the flanks of Cader Idris in southern Snowdonia, possibly the moodiest in the entire National Park. The easiest approach is from the east, via the minor road from Dolgellau.

Tŷ Cipar
This remote former gamekeeper’s house is located high on the Migneint, an area of blanket bog rich wildlife that stretches from Ysbyty Ifan to Llan Ffestiniog. It’s on the B4407, about 4½ miles south-west of Ysbyty Ifan and 5½ miles north-east of Llan Ffestiniog.

Bwlch y Groes
The highest surfaced mountain road in Wales, between Dinas Mawddwy and Llanuwchllyn, ‘The Pass of the Cross’ rises to 1,791ft/546m. As well as its crystal night skies, it’s also worth visiting in daylight for the amazing terrestrial views, stretching from Cader Idris to the Berwyn Mountains. 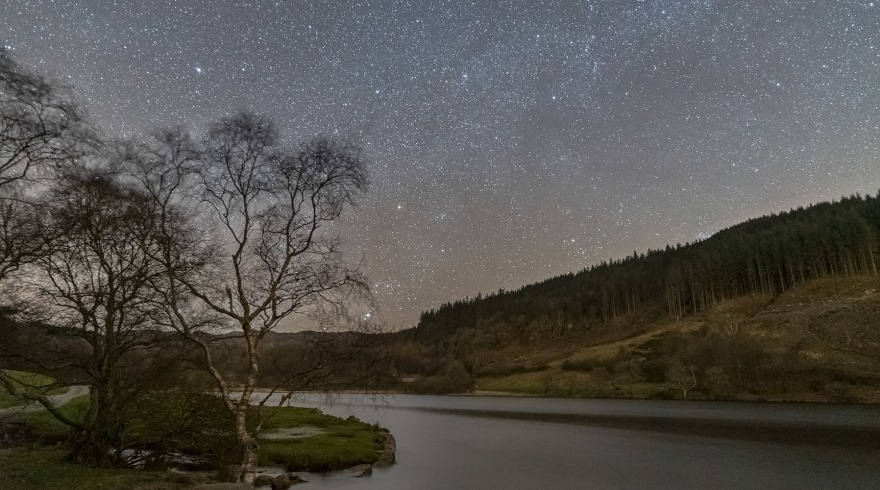