The culture and identity of the Snowdonia region has been significantly influenced by the myths, legends, folklore, giants, monsters and magic that are associated with almost every lake, hill, mountain and village. The Welsh tradition of storytelling has ensured that these rich and varied tales are still as vibrant today as they were in their early beginnings in the mists of time. Wherever you visit in Snowdonia Mountains and Coast, the past, its magic, mythology and legends are around every corner.

The most famous and influential of all the fables is a series of medieval stories known collectively as the Mabinogion. They describe the lives and the heroic and magical achievements of a group of interrelated characters and recount the encounters between the mortal and underworlds. These fables embrace aspects of a pagan era and the medieval world of the Arthurian age.

Locations throughout the Snowdonia Mountains and Coast region are associated with the Mabinogi, such as: Harlech, Llan Ffestiniog, Dinas Dinlle to name but a few.

King Arthur, who makes an appearance in many of the Mabinogi tales is heavily associated with the area. Several place names bear his name. Cegin Arthur and Ffynnon Arthur in Snowdonia reputedly have healing properties, and many tales associated with caves across the region tell of a sleeping Arthur who awaits the call to return with his men to rescue Wales. The lakes of  Llydaw, Dinas and Ogwen, amongst many others, claim to contain the magical Excalibur. A stone reputedly bearing the hoof print of Arthur’s horse 'Llamrai' can be found on the banks of Lake Barfog near Aberdyfi. It is said that the mark was made when Arthur and his horse dragged a monster from the lake’s deep waters.

Arthur is also associated with mount Snowdon, where he reputedly killed the mountain’s most famous resident - Rhitta, a fearsome giant who created a cape for himself out of the beards of his enemies. His corpse was covered in huge stones by Arthur’s men at the summit of the mountain.

Bardsey Island off the coast of the Llyn peninsula also has Arthurian associations. It is said to be the burial place of Merlin who lies in a glass coffin surrounded by the 13 treasures of  Britain and nine bardic companions. Bardsey is also claimed to be the fabled Avalon.

Merlin is also associated with Gwrtheyrn. Vortigen, a cruel and unpopular 5th century warlord, escaped his enemies by running away to the mountain of Aran near Beddgelert.  He instructed his men to build him a castle on the site but every morning the men would find the previous day’s construction destroyed. Vortigen’s advisers told him to seek an orphan boy reared by the fairies. His men finally found the boy Myrddin Emrys, or Merlin for short. The boy explained that two dragons - one white and one red - in a lake underneath the site of the proposed castle, were in mortal combat, and that the red dragon (the Welsh) was thwarting the white dragon (the Saxons).  On hearing the news Vortigen fled and Merlin handed over the castle to Emrys Wledig, and to this day the remains of  the ancient fort of Dinas Emrys can still be seen.

It is in Nant Gwyrtheyrn that the most famous and saddest of all Welsh language tales is based, the story of Rhys and Meinir.

Rhys Maredudd and Meinir Maredudd were cousins that lived on different farms in the Nant. They fell in love with each other and their favorite meeting place was by the trunk of an old oak tree in the valley.

They decided to get married in Clynnog Church nearby. On the morning of the wedding, it was customary for the bride to hide from the groom’s friends who were to escort her to church. Rhys’ friends searched and searched for Meinir, but to no avail. They went on to the church without her, expecting to see her there. But, having reached the church she was nowhere to be seen.

Everyone started to worry, especially Rhys, who went back to the Nant to look for her. Weeks and months went by with no sign of Meinir. Rhys looked for her day and night – his only companion was his faithful dog, Cidwm.

Sad and distraught, Rhys slowly went mad. One stormy night, whilst out looking for Meinir, he and Cidwm took shelter underneath the old oak tree where he and Meinir used to meet. A bolt of lightning struck the tree and split the trunk in half, only to reveal a skeleton wearing a wedding dress that fell to the ground beside Rhys. The shock was too much for poor Rhys and he died instantly. Cidwm, the dog, lay down to sleep beside his master and never woke up.

There was a time when, if you had looked out towards Ireland from the Dyfi Estuary, you would see lush, fertile lands stretching out some 20 miles into what is now Cardigan Bay. This area was known as Maes Gwyddno (the land of Gwyddno). Around 600AD, the major settlement on this land was known as Cantre’r Gwaelod (the Bottom hundredth).

It was a valuable part of the kindom of Meirionnydd and ruled by Gwyddno Garanhir (Gwyddno Longshanks). Owing to the low-lying nature of the land, it was protected from the sea by a large dyke. The dyke had sluice gates that were opened at low tide to drain the water from the land, and closed again as the tide returned, but one terrible night, one man’s carelessness caused the drowning of Cantre’r Gwaelod and all the lands of Maes Gwyddno.

Cader Idris is one of Wales’s most iconic mountains. It is about 893m in height, standing at the southern gate of Snowdonia, overlooking Dolgellau. The three peaks are Pen y Gadair (Head of the Chair), Cyfrwy (the Saddle) and Mynydd Moel (the Bare Mountain).

There are numerous stories and legends associated with this mountain and Idris, the giant who’s seat it supposedly is. A few of the nearby lakes – such as Llyn Mwyngul (commonly known as Tal-y-llyn lake) are reputed to be bottomless, and those who venture up the mountain at night should take heed before sleeping on its slopes. It is said that those who sleep on the mountain will awaken either as a madman, a poet or indeed never wake again. 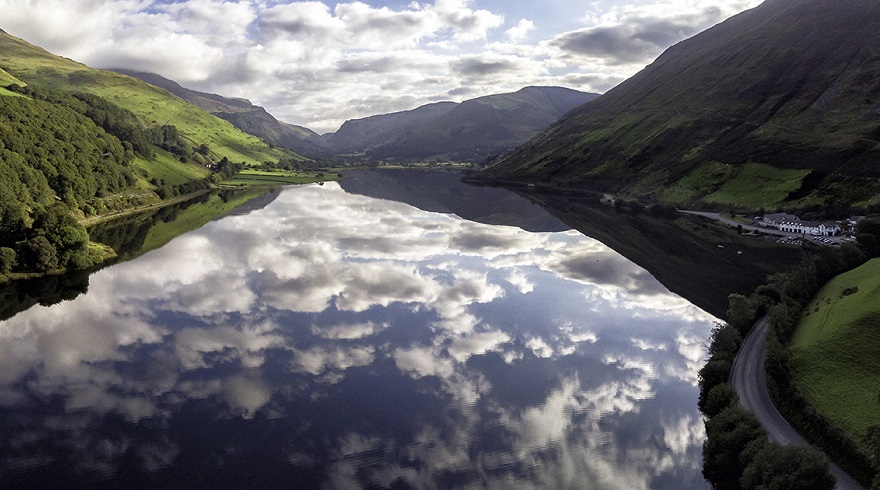